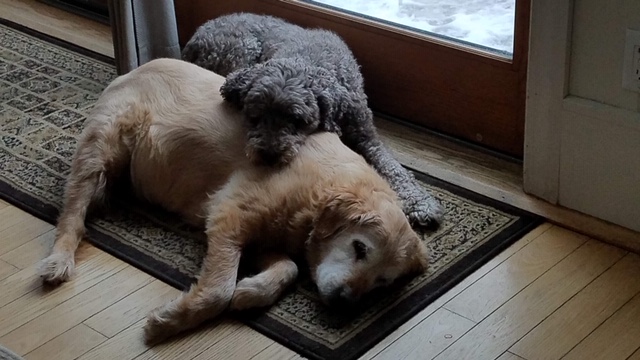 Our oldest dog, Cosmo, was struggling with extremely poor health. Friends and family had been encouraging us to stop his suffering.  Hazel, our 6 year old standard, had never known life in a one dog house.  We knew we were facing the hard decision to put Cosmo down.  He had a softball size hot spot on his back, and he was literally trying to chew his paws off.  His walking was terrible with frequent falls.  The decision was made harder, because most of the day, he didn't appear to be in any pain. At other times, he refused to eat (not normal for him!) and his breathing was labored. We started considering a new companion for Hazel and stumbled across a 3 year old standard poodle named Honey.  We knew she had some trust issues, but she appeared to be a sweet dog.  So, after a four hour drive to meet her, we arrived back home.  She was extremely calm the whole ride home, sitting near our son, Nic, who was getting ready to return to college for his second year.  We arrived back in Caribou just has the sun was setting and were greeted by family members excited to meet the newest member of the family. Not thinking, I opened the door and Honey jumped out.  She took one look at all these strangers and started a slow jog away from us.  That started a two day search through potato fields, back yards, cemeteries and highways spanning five miles. With lots and lots of help from generous people, Honey made her way back to our high school and gave herself up in the baseball field. She has come a long way in just a few months, from runaway to part of the namesake of Honey & Hazel.  And, oh, by the way since switching to Honey & Hazel food, Cosmo has made a miraculous comeback!  Cosmo's chicken miracle formula was created and we are now a three dog family!